The Nigerian Army Council has approved the promotion of senior officers to the next ranks of Major General and Brigadier General respectively.

The Chief of Army Staff, Lt Gen Tukut Buratai congratulates the beneficiaries and charged them to redouble their efforts in the discharge of their responsibilities.

Buhari congratulates Bakare at 65, says ‘May our ideas give us the country of our dreams’

This site uses Akismet to reduce spam. Learn how your comment data is processed. 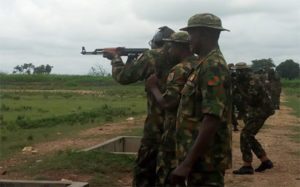