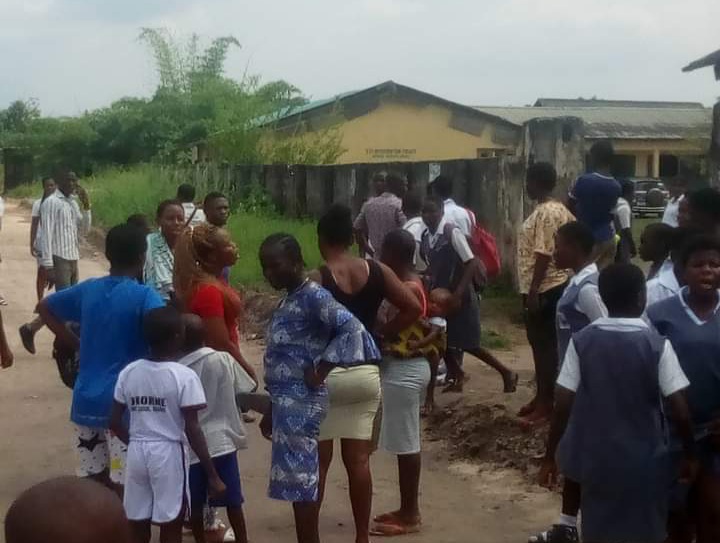 People gathered in from the Ohorhe secondary school

TheNewsGuru.com (TNG) reports the gunmen stormed the premises of the Ohorhe secondary school in a gold coloured Highlander, which registration number was not confirmed.

According to an eyewitness, the gunmen drove into the school and parked in the premises for some time before storming the school staff room, wielding guns and taking the three teachers with them.

The eyewitness told TNG: “I was in the village. I was sitting with my two brothers. I am not living here. I came for a visit. The next minute, what we heard was: kidnappers, kidnappers.

“So we ran down to the school. Before getting there, the kidnappers have already gone.

“Then we went to meet the teachers and they started explaining that some gunmen, they came into the school in army uniform, that they drove in in one gold coloured Highlander.

“When they came, they parked. After some time, they came down. They entered the staff room wielding guns. They abducted three teachers.

“When our community boys heard the shout of kidnappers, they started running towards the direction of the school. They met the Highlander coming out of the school premises and they pointed gun at the boys.

“The boys ran down there with their empty hands, no cutlass, no wood, and nothing; so they had to back off as there was nothing they could do in that situation.

“They started shouting to draw attention as the school is close to the road. Before others came, the kidnappers are already gone”.

At the time of filing this report, the police in Delta State was yet to release an official statement on the incident.

Meanwhile, two suspected armed thieves were set ablaze by a mob along Okumagba Avenue, by Emebiren junction in Warri, Delta State, in the early hours of Tuesday

The duo was pursued to the location where they were trapped and tortured before they were set ablaze.

According to reports, the suspected robbers had stormed the area about 5:30 am in a commercial tricycle to operate, but were stopped by the mob.

The Divisional Police Officer, “B” Division in Warri, CSP Benjamin Igometi, confirmed the incident. He stated that he received distress calls from the neighborhood in the early hours of the day that some robbers were operating.

”They just called me just now that some robbers came to attack in that area, and they caught them, and they were lynched. That’s what I heard.” he said