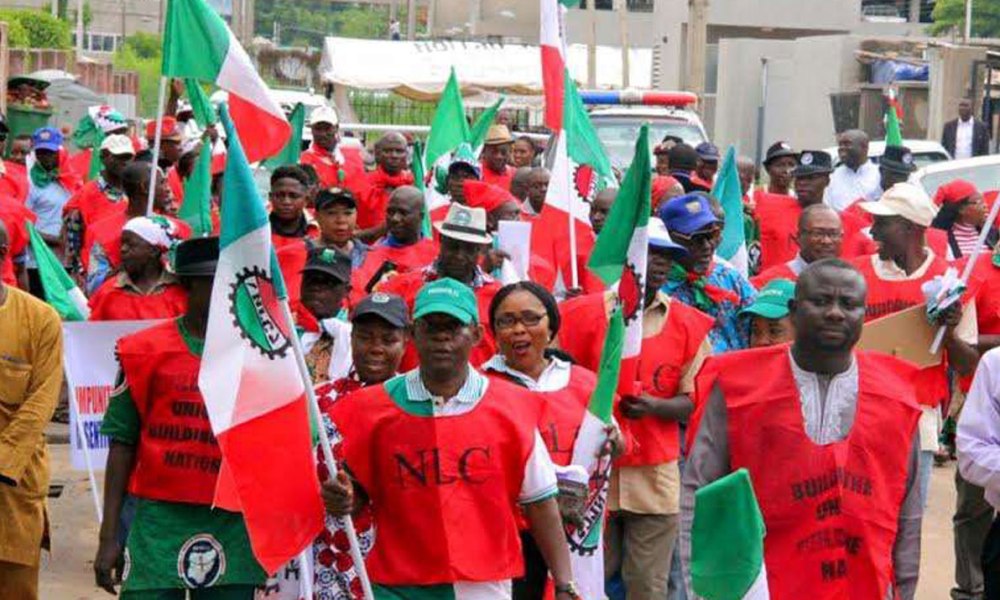 The Nigeria Labour Congress (NLC) and the Trade Union Congress (TUC) have suspended the nationwide strike scheduled to commence on Monday (today), September 28.

Firstcall News reports that labour’s decision to suspend the planned nationwide industrial action followed an agreement reached with the Federal Government at a meeting which started at 8.30pm on Sunday and ended at 2:50am on Monday (today) morning.

Sen.  Christ Ngige, Minister of Labour and Employment said this while reading a joint communique on the resolution of the Trade Dispute between the Federal Government and the organised Labour on Monday in Abuja.

Ngige said the resolution reached with the organised labour was an outcome of a fruitful deliberation.

According to him, on the issue of electricity tariff reforms, the parties agreed to set up a Technical Committee comprising Ministries, Departments, Agencies, NLC and TUC, which will work for a duration of two weeks effective from Monday, Sept. 28.

“The committee is to examine the justifications for the new policy in view of the need for the validation of the basis for the new cost reflective tariff.

The minister said the committee should also look at the different Electricity Distribution Company (DISCOs) and their different electricity tariff ‘vis-à-vis NERC’s order and mandate.

Ngige, on the issue of the downstream sector deregulation, said all parties agreed on the need to expand the local refining capacity of the nation to reduce the over dependency on importation of petroleum products

He said NNPC was directed to expedite the rehabilitation of the nation’s four refineries located in Port Harcourt, Warri and Kaduna and to achieve 50 per cent completion for Port Harcourt by December 2021, while timelines and delivery for Warri and Kaduna will be established by the inclusive Steering Committee.

“The Federal Government and its agencies are to ensure delivery of one million CNG/LPG AutoGas conversion kits, storage skids and dispensing units under the Nigeria Gas Expansion Programme by December 2021 to enable delivery of cheaper transportation and power fuel.

“A Governance Structure that will include representatives of organised Labour shall be established for timely delivery,” he said.

Ngige also said on the issue of general intervention that the government will facilitate the removal of tax on minimum wage as a way of cushioning the impacts of the policy on the lowest vulnerable.

He said the Federal Government would give the labour unions 133 CNG/LPG driven mass transit buses immediately and ‘provide to the major cities across the Country on a scale up basis, thereafter to all States and Local Governments before December 2021.’

He said 10 per cent of the ongoing Ministry of Housing and Finance housing initiative would be allocated to Nigerian workers under the NLC and TUC.

According to him, a specific amount is to be unveiled by the Federal Government in two weeks’ time,  which will be isolated from the Economic Sustainability Programme Intervention Fund that can be accessed by Nigerian Workers with subsequent provision for 240,000 under the auspices of NLC and TUC.

“This is for participation in agricultural ventures through the CBN and the Ministry of Agriculture. The timeline will be fixed at the next meeting,” he said.

In his remark, Mr Ayuba Wabba, NLC President said that both the government and organised labour have looked into the issue of fuel price hike and what was needed to be put in place in order to address the issue of the increase.

“We have discussed the state of our refineries and how to achieve sustainable refineries.

“We have also looked at the issue of the tariff hike and other challenges.

“We agreed to suspend the strike, and we agreed to also put a committee in place to work out lasting solution in addressing these challenges, including the issue of metering and importantly also is to bring about the issue of efficiency.

“We also reviewed the process of privatisation and other issues such as clear palliatives that were needed to be extended to our members and Nigerians to cushion the effect of these policies,” he said.

Wabba, therefore, called for social dialogue as a way of addressing issues of industrial relations, socio-economic issues and also issues of development.

According to him, the labour hopes that the communique will be implemented, and therefore, the decision of the organised labour as represented here is to suspend the action.

“We are going to convey our Central Working Committee meeting to present the communique to them,” he said.

Also, Mr Quadiri Olaleye, TUC president noted that based on the agreement signed between the government and the labour, the planned industrial action would be suspended for two weeks.