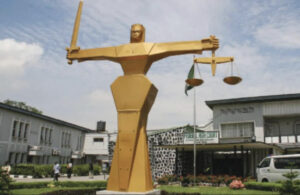 Muritala told the court he married his wife in 1969 and that their eldest child is 51 years old.

According to him, his wife has refused that he had rest of mind.

The plaintiff explained that the defendant was always on his neck and that she had no respect for his family members.

He added that she turned all their children against him.

Muritala further stated that Afusat was always refusing him sex and banging the door of her room on him. He said she flaunted it before him that she has another man taking care of her.

The plaintiff explained that the defendant was always threatening to kill him. According to him, she almost made real her threat when she attempted to stab him with a knife because he took a new wife.

Muritala thus begged the court to dissolve their marriage.

Afusat refused that their wedlock be dissolved.

According to her, she had faithfully served her husband, whom she bore six children for almost throughout her life.

She added that she had always refused her husband sex in order to protect her life. According to her, her husband loves women and is always in one relationship or the other.

Afusat explained that he took ill and started behaving strangely after he spent the night with his new wife.

She stated that Muritala once hit her on the head with a stone and that at another time with an iron bar on her shoulder.

Muritala, giving his evidence said: “My experience has been a harrowing one since I got married to my wife 52 years ago. I regret ever marrying her.

“We got married in 1969 and our eldest child is 51 years old but despite this, we still shout on each other and fight.

“All that Afusat wants is that I die. She wishes me dead all the time.

“Any time we have a misunderstanding, she will compose a song to spite me. The undertone of her songs all the time is that I die.

“Afusat has no regard for my family members. She never ceases to ridicule and humiliate them.

“We often quarrel because she loves to lord it over me and this I always resist.

“My lord, my wife till date refuses me sex. Whenever I demand for sex, she will refuse that I enter her room. She will bang the door of her room in my face if I insist on having my way.

“Hell was let loose when I married a younger woman. She got jealous and mad with me one day and almost stabbed me with a knife. I would have been a dead man by now if my younger wife had not screamed when she forced herself into my room and aimed the knife at me.

“ I dodged her and held her hand from the back. We both struggled with the knife before other family members, who were around, came to my rescue.

“Her siblings came to fight me and destroy my property after this. They beat me blue black, broke my glass door and pulled down the other doors.

“I went out of my way to care for her family members but they rewarded me with evil.

“Afusat was a dullard when I married her. She knew nothing. I was the one who taught her to read and write but she now lords it over me.

“My wife turned our children against me. My lord, I believe these children belong to cults. Their plan is to get rid of me and take over my property.

“They once came to the house and collected documents of my property and keys to my possessions from me. I was scared that they wanted kidnap and kill me. I, therefore, started shouting on top of my voice for help.

“Afusat of recent told me he has another man taking care of her.

“My lord, I don’t want my wife under my roof any more. I’m also no longer interested in our children.

“I beg this court to hear my prayer and separate us,” the plaintiff said.

“My lord, I refuse to accede to divorce. I spent my whole life serving my husband. He never gave me the opportunity of establishing myself because we were always moving from one country to another.

“He was awarded a scholarship in 1972 and we moved to Saudi Arabia. From there we went to Nairobi, Zaire and then back to Nigeria.

“On getting to Nigeria, we moved to Ikere Ekiti and from there, he was posted to Lagos.

“He couldn’t secure an accommodation early enough in Lagos and had to put up with a friend. I moved into my family’s house with our children and was there till he could afford a good and affordable accommodation and we all started living together again.

“We moved to Ibadan about 10 years ago and he built a three bedroom flat where we presently live.

“My husband and I lived peacefully all through these years; we were always eating together.

“He suddenly took ill after spending the night with his new wife. His wife raised the alarm when he started behaving strangely. She called unto me and I rushed to his room. We rushed him to the hospital and after several tests were carried out, we were told he will have to be on some drugs for life.

“Our children spent through the nose taking care of him while I was by his bed all through the time he was on admission in the hospital, but he has now turned round to give us a bad name.

“My lord, there was never a time I attempted to stab him. He was the one who once hit me on the head with a stone and at another time, an iron bar on my shoulder.

“He has brought into our homes different women at different times that he referred to as his wives, but they all ended up duping him. They all ran away with his money and property.

“My husband still demands for sex at the age of 80 and I always say no.

“I refuse him sex because he’s always into a relationship with strange women. I cherish my life and wish to live long and stay healthy,” the defendant concluded.