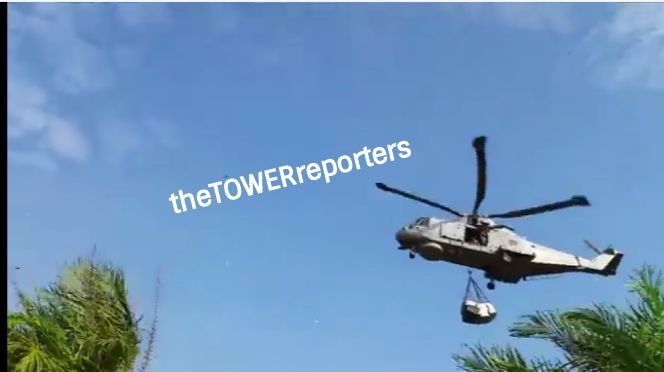 Political elders from Borno and Yobe states have alleged that helicopters drop arms and ammunition, food and medicine to areas well known to be strongholds of the members of the dreaded Boko Haram sect in the North-East.

They said it was unbelievable that the authorities would claim ignorance of this development, wondering how about 20 to 30 Toyota Hilux vehicles could move in a convoy freely with a subsisting curfew without being detected.

The elders, who spoke at a press conference in Abuja on Monday, also asked the government to provide answer raised by the insurgents’ attack on the Maiduguri Air Force Base, where the terrorists demobilised and burnt planes and other military installations despite the existing state of emergency and curfew in the town.

Speaking under the aegis of Borno, Yobe People’s Forum, the elders also asked those in authorities to tell Nigerians those who authorised the withdrawal of security personnel from the Federal Government College, Buni Yadi, few hours before the attack that claimed the lives of 59 innocent children.

A former Chief of Air Staff, Air Vice Marshall Al-amin Dagash (retd.), read the text of the statement on behalf of the members of the Forum at the press conference.

He was flanked by a former Minister of Finance, Mallam Adamu Ciroma; a former Secretary to the Government of the Federation, Ambassador Babagana Kingibe; elderstatesman, Shetima Mustapha, and some political and opinion leaders from the two states.

The former Chief of Air Staff wondered why security reports from the communities on impending attacks were ignored or not promptly responded to by security personnel and the government.

Dagash said, “Are the authorities unaware of helicopters dropping arms and ammunition, food and medical supplies to areas well known to be strongholds of the surgents?

“How were the insurgents able to attack the Maiduguri Air-Force Base and demobilise as well as burn planes and other military installations despite existing state of emergency and curfew in the town? How could 20 to 30 Toyota Hilux vehicles move in a convey freely with subsisting curfew and still go undected?

“How did a little band of rag-tag misguided youths metamorphose into a well kitted, well armed killing machine moving freely in convoy of vehicles and supported by holicopters.

“How did the Shilka Tank, a multipurpose self-propelled anti-aircraft artillery weapon positioned to secure Giwa Barracks fail to function resulting in heavy loss of lives of both civilian and military as widely reported in the media? Are we dealing with fifth columnists in this crisis?