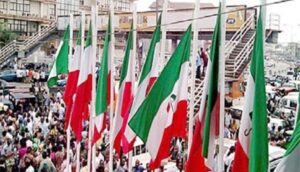 The leadership crisis rocking the Peoples Democratic Party (PDP) has taken another dimension, as the Deputy National Chairman (South) of the party, Elder Yemi Akinwonmi takes over the affairs of the party.

Recall that a High Court of Rivers State had on Monday issued an interim injunction restraining, Prince Uche Secondus from parading himself as the National Chairman and member of the PDP.

The judge, after reading the affidavit in support of the motion of ex parte as well as the written address, and after hearing the submission of H.A. Bello, counsel to applicants, granted the interim injunction restraining Secondus from parading himself as the national chairman of the PDP.

Reacting to the Court on Tuesday, Elder Akinwonmi, in a statement cited Section 35(3) (b) of the Constitution of the PDP, which empowers him to summon and preside over party meetings in the absence of the National Chairman.

He has, however, postpone the National Working Committee (NWC) meeting earlier scheduled for Tuesday until further notice to allow for broader consultations in the overall interest of the party.

The statement reads: “Section 35(3) (b) of the constitution of the Peoples Democratic Party empowers me to summon and preside over party meetings in the absence of the national chairman.

“Our attention was drawn yesterday evening to a court order which purports to restrain our National Chairman, Prince Uche Secondus from summoning and presiding over the meetings of the organs of the party.

“In the foregoing circumstances, as Deputy National Chairman (South) of the Peoples Democratic Party, after the consultations and in exercise of the aforesaid powers, hereby deem it fit and proper to postpone the National Working Committee meeting earlier scheduled for today until further notice to allow for broader consultations in the overall interest of our party.”