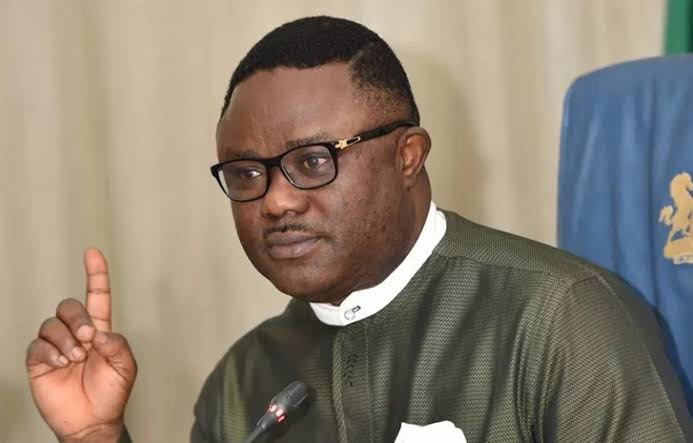 The Cross River State Governor, Sen. Ben Ayade Tuesday 2, June, 2020 has sworn-in the newly elected chairmen and vice Chairman of the 18 local government councils of the state.
The event took place at the State Executive Chamber of the Governor’s office, Calabar.
The newly sworn-in chairmen and their vice emerged victorious in last Saturday’s council polls.
The Peoples Democratic Party, PDP cleared the entire 18 councils areas and also produced all the councillors.
Speaking after swearing them in, Ayade urged the council Chairmen to avoid unnecessary trips outside their councils, harping on the need for them to stay back home and work for their people.
The governor disclosed that he was leaving behind for the newly elected chairmen, N11.386 billion as take off fund, adding that they had no reason not to perform.
“Remember I am giving you councils that are not owing salaries, not owing pension. So I don’t want to hear tomorrow that your are owing.
“We are happy to announce to you that you are coming into office while the governor leaves behind N11.386 billion in your coffers.
“Today marks a great opportunity for the people at the grassroots who have never had direct access  to government, to feel the impact of government,” the governor told the new chairmen.
He further implored them not to engage in grandiose projects but concentrate on simple projects that directly impact on the lives of the people.
His words: “You are serving the grassroots, I do not want you therefore, to embark  on big projects. I need you to deal with those projects that directly impact on the lives of the people. I need you to deal with boreholes, I need you to deal with culverts, minor bridges that link communities.”
The governor advised the chairmen to work harmoniously with their councillors so as to effectively serve the people.
“I urge you to work in harmony with your councillors. There must not be a divided house. Therefore, work harmoniously with the councillors so that together you will serve the people effectively”, the governor said.
He also urged them to reside in their respective local government areas so as to be abreast of the needs of their people
Share on Facebook Share on Twitter
Post Views: 148